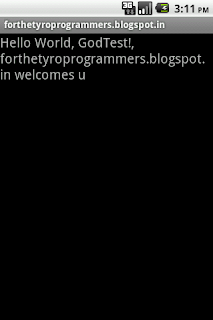 (Before Applying the Font type)

This post helps the Tyro’s who are trying to apply their user-defined font type or face to their android views i.e. (TextView, Button, EditText etc…) in android there are only four basic predefined fonts type are available to design but in order to design our rich UI we are suppose to go with our own font face (.ttf) so first we need to copy our font type file (.ttf) in to our assets folder showed in Package Explorer and use the code highlighted in the GodTest.java file 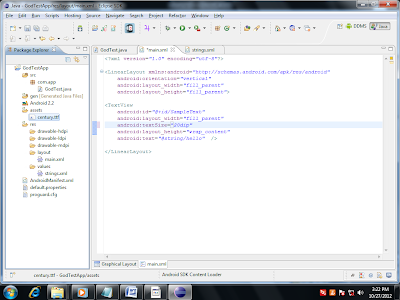 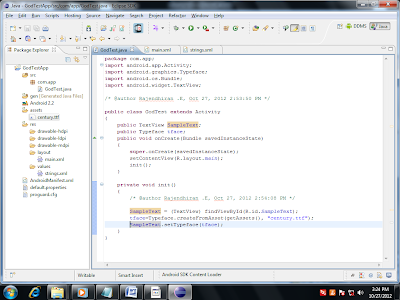 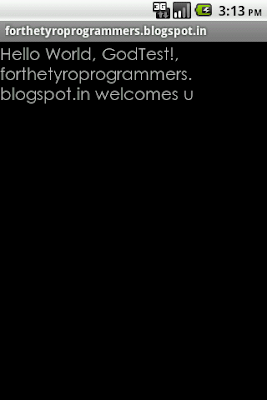 (After Applying the Font Face)
Posted by Rajendhiran Easu at 23:02 No comments: Links to this post

Get Your Android Device UDID:

Posted by Rajendhiran Easu at 05:27 No comments: Links to this post

How to learn Android App development in 30 days?

You need to study core Java before starting to enter into the android platform.

Once you learned Code java

Try the below link and learn it by 5 days
Tutorialsbuzz ,programming blog for android ,java,game and code

In this link they have explained about android development from the very basic things.

They have many tutorial application with perfect explanation. And it will be easy to understand.

This blog will be useful to learn material designs and advanced technologies like chat application to do web service etc..

Study and workout the below mentioned widgets by 10 days
That’s it, you can learn Android with in 25 days.

Thanks :)
Posted by Tamilselvan at 22:07 No comments: Links to this post

Posted by Rajendhiran Easu at 05:24 No comments: Links to this post

java.lang.OutofMemoryError: bitmap size exceeds VM budget. This is most common error for us when we are decoding Bitmap more than 4 MB. In generally before decoding bitmap we do not know how much bigger the size of a bitmap will be. So its very difficult problem for us to handle this error in proactive approach But good thing is that android provide a way to handle this problem.Before decoding bitmap we just decode it with options.inJustDecodeBounds = true. options is the instance of BitmapFactory.
It does not load bitmap into memory but it help us to find the width and height of a bitmap so that we can reduce the height and width according to our device

As Bitmaps take up a lot of memory, especially for rich images like photographs. For example, the camera on the Galaxy Nexus takes photos up to 2592x1936 pixels (5 megapixels). If the bitmap configuration used is ARGB_8888 (the default from the Android 2.3 onward) then loading this image into memory takes about 19MB of memory (2592*1936*4 bytes), immediately exhausting the per-app limit on some devices.

So we will find actual height and width of a bitmap as follows...


Memory over flow error is gone…….

Posted by Rajendhiran Easu at 20:09 No comments: Links to this post

Posted by Rajendhiran Easu at 05:20 No comments: Links to this post

How to create the Customized Splash Screen in Android 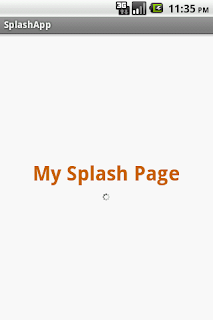 a.       Layout having the TextView with the splash screen title
b.      ImageView having the Loading image

2.      Create a rotate.xml in a drawable folder for need of  loading animation

a.  Referencing the xml widgets in to code.
b.  Create a Animation and start load the animation to the ImageView.
c.     Using the handler class and runnable thread make postdelay for 1000 milliseconds   and clear the animation then start the second activity.


Source Code: SplashScreen.zip
Posted by Rajendhiran Easu at 23:09 No comments: Links to this post


CountDownTimer is a predefined class, which help us in the timer related activities, such as showing up the  reducing of time seconds, that we have seen while playing games or doing some timer related stuffs to our apps etc… its easy to develop just passing the milliseconds as parameters and it throws as our customized output as (HH:MM:SS) etc… 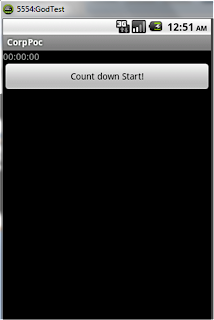 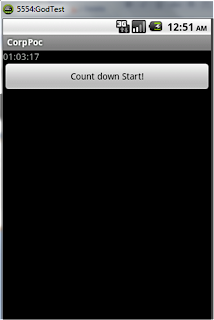 1.     Design a layout with a counter start Button and TextView to display the time

Posted by Rajendhiran Easu at 21:14 No comments: Links to this post

Plurals are a type of resource, we use it very often to deal with plurality of Strings, what does plurality of Strings means? Suppose you wants to denote the stock items and you want to print out the result, you will have to write at least 2 Strings like:


and then you will add some logic to your code


It is not a best practice to keep languages in logic inside our code, imagine you have many internationalized text and every languages have its own kind of formatting rules !

We are going to use “Plurals” tag rather than “String” tag


Note that each language have limited quantity values based on grammar of each language, for English there are only two values of quantity “one”

and “other”,  “zero”  is not allowed in english, The plurals have the following types but it get differs to the languages.

Zero When the language requires special treatment of the number 0 (as in Arabic).

Other       When the language does not require special treatment of the given quantity (as with all
numbers in Chinese, or 42 in English).

We are suppose to use getQuantityString method:

For showing the soft keyboard on entering into the activity or to the dialog we can use this coding
Code Snippet:

and for hiding the keyboard
Code Snippet:

#Perfectionist#BoilerplateCodeHater
People who are regularly following my Tamizh and English story blogs will be well know about me.
Blogs:
http://www.chandrawriteups.in
http://tamil.pratilipi.com/chandra
https://www.booksie.com/portfolio-view/Chandra-135337
P.S. Stories are written in a pen name Chandra
This is my technical blog and managing with my besties and here we are gonna update you with the technology stuffs which always help us to keep grow.
Contact:
Rajendhiran Easu
rajendhiran.mca@gmail.com
Developer | Geek | Blogger | TechSavvy |Author | Trainer | Tech Evangelist