In object-oriented programming, delegation refers to evaluating a member (property or method) of one object (the receiver) in the context of another original object (the sender).

Kotlin supports “delegation” design pattern by introducing a new keyword “by”. Using this keyword or delegation methodology, Kotlin allows the derived class to access all the implemented public methods of an interface through a specific object

Delegation should be used when:

Example: This will be very simple and self-explanatory code snippet, here we are having an interface IPayment for the payment and it would track the mode of payment happens, and there would be an implementation classes CashPayment, UPIPayment, CardPayment of different mode of payment (Cash, Card and UPI).   There in PaymentProcess class the delegation will be happen through the interface.  Also the method paymentProcess in java and processPayment in Kotlin does the payment process.
Comparatively with Java and Kotlin, In Kotlin we avoid lot of boilerplate code because of delegation using “by”, else in java we are mandatory to do the implementation of all interface method (see in this example I have used only one interface method, so if it is more than, it would be more override method in PaymentProcess.java class). 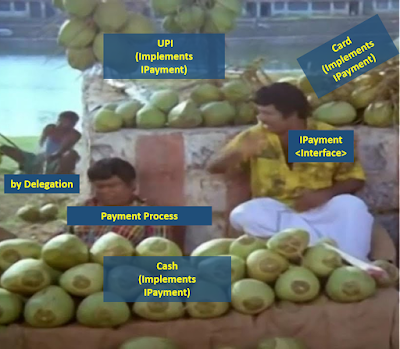