Best Programming Languages You Should Learn To Boost Your Salary

The 2016 Workforce-Skill Preparedness Report of Pay-scale, a salary tracking site, is out with many interesting trends related to the current tech job scenario. The report outlines that Go, Scala, and Python, along with big data tech provide the highest boost in your paycheck. if you are willing to grab a big bite of salary boost by learning some new technology or programming language, we are here to help you.It’s a no hidden fact that the knowledge of big data skills is the most in-demand in the tech world.

Today, the job market is witnessing a paradigm shift and big data skills like Hadoop and Apache Spark, along with Python, Go, and Scala, are gaining high in highest paid lists.  Using its pay-tracking database, the same trend in IT and other industries has been observed by Pay-scale.

These results have been published recently in its 2016 Workforce-Skills Preparedness Report. Among the highest valued skills that provide the biggest pay boost, all are tech related. Out of such top nine skills, seven are directly related to the deep knowledge of programming languages, frameworks, and operating systems.

The biggest jump is provided by the functional programming language Scala with an average pay jump of 22.2 percent.  Google’s Go programming language followed Scala at the second place with a 20 percent pay boost.  While Python didn’t crack the top positions in this list, it had a prominent presence in Pay Scale's survey. Depending on the job titles, Python was found to provide a pay boost of up to 8-14 percent.

Here’s the list of top 9 technologies that provide the highest salary jump: 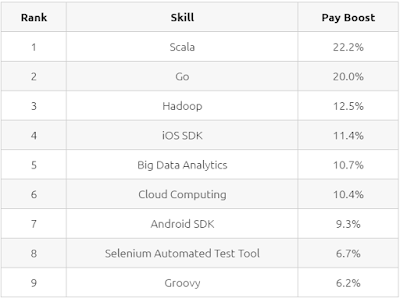 Posted by Rajendhiran Easu at 03:47